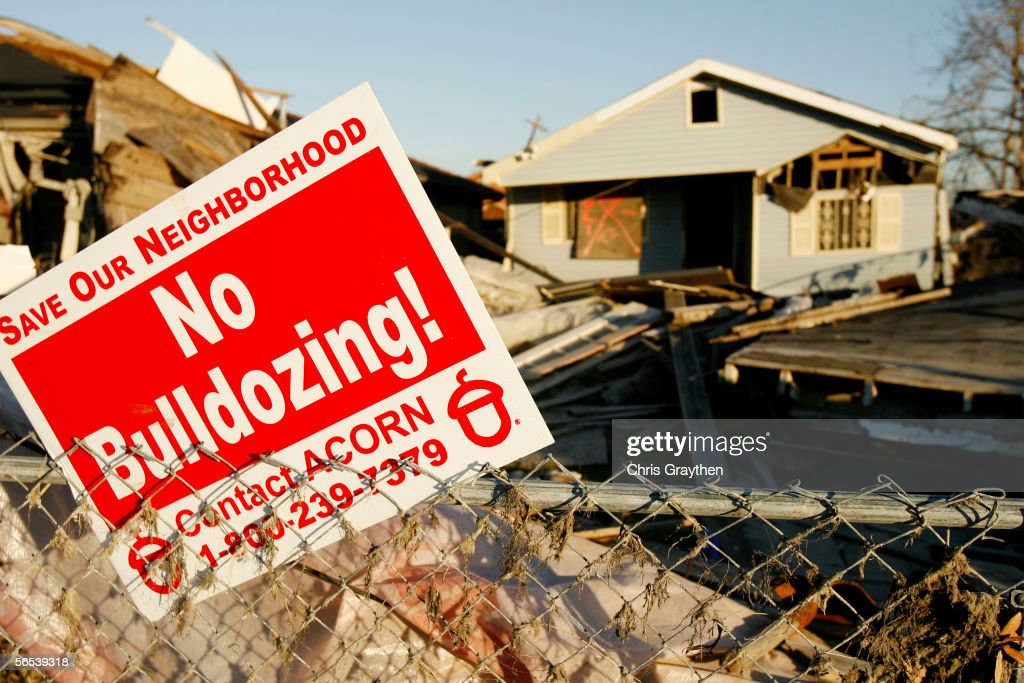 In class, we got our first glimpse of ACORN through Josephine Butler and her granddaughter, Tanya Harris. Both wore bright red T-shirts adorned with an ACORN symbol– a typical field uniform– as they were interviewed on a hot, bright day amid the destruction in the Lower Ninth Ward.

ACORN, which stands for Association of Community Organizations for Reform Now, was one of the country’s foremost and most controversial antipoverty organizing groups. In the aftermath of Hurricane Katrina, the organization took a prominent role in providing direct aid– such as repairing homes– but also in organizing the citizenry of NOLA in huge ways. When Mayor Ray Nagin worked with NOLA’s financially powerful to create a blue-ribbon task force to rejuvenate the city, they together came up with a plan: shrink the city’s population, but focus on the most upscale areas– not places like the Lower Ninth. ACORN organized residents to fight this plan, plastering ‘No Bulldozing’ signs all over the neighborhood. When ACORN lost the fight to get satellite polling areas for NOLA’S mostly-black, displaced population, it helped register tens of thousands absentee voting ballots instead.

Yet what happened to ACORN a few years after Hurricane Katrina was the essential demise of the organization. According to John Atlas, the author of Seeds of Change: The Story of ACORN, ACORN has been targeted in a “ferocious attack by the GOP, Fox News and Andrew Breitbart” which focus on exaggerated and miscalculated accusations– from voter fraud in Nevada to heavily edited videos implying that the organization supported prostitution. The New York Times also covered the sting, but public editor Clark Hoyt revisited the coverage a year later, uncovering many of the discrepancies in the “prostitute and pimp” video that severely tarnished ACORN’s reputation. It was too little too late. ACORN was finished.

As I think of the history of ACORN’s doctored demise, I can’t help but think of other organizations considered “radical” that also suffered a declension largely at the hands of manipulated media. In the tradition of black organizing, it is not unheard of that powerful grassroots organizations fall at the hands of a misconstrued popular opinion. For example, in the history of SNCC, or the Student Nonviolent Coordinating Committee– a grassroots students group at the forefront of the Civil Rights Movement– a declension model of the organization was framed in a way I find similar to ACORN’s. For example, when Stokely Carmichael uttered the infamous “Black Power!” slogan at the Meredith March Against Fear in 1966, it was interpreted by many– such as the media– as a sign of SNCC’s move toward a radical kind of racial separatism, what many in the nation viewed as an ultimate demise. These critiques missed the nuance of what Black Power actually meant for SNCC, and didn’t take into account the fact that Black Power, rather than a catchy slogan, was a movement rooted in grassroots black political organizing in Lowndes County, Mississippi.

To me, the history of both SNCC and ACORN are interesting and paralleled. They were grassroots organizations with deep connections to black communities. Yet the way they are written out of our consciousness– or into history– is similar.