Throughout Jemisin’s Broken Earth series we learn how imperial orogenes learn to harness their orogenetic abilities at the Fulcrum. Damaya, amongst other orogene children, learn how to control their torus while practicing their art of orogeny in the Crucible. Although all of this sounds run of the mill, I wanted to look into what each of these terms meant, both in a literal and symbolic sense.

The definition of a fulcrum is as follows: a pivot point around which a lever turns, or something that plays a central role in or is in the center of a situation or activity. An example given by dictionary.com is “A pivot point around which a lever turns is an example of a fulcrum.” This got me thinking about the purpose that the Fulcrum serves in the novels. It is mentioned that there are three fulcrum’s on the Stillness: one at either pole and one within the city of Yumenes. While Orogene children are outside of the Fulcrum they are considered lethal and deserving of death by the general population. We read time and time again of the stories of young orogene children being murdered for their gift. Damaya is one of the “lucky” ones that got reported to the authorities of orogenes, known as Guardians, and taken to the Fulcrum in Yumenes. When the children get to the Fulcrum and receive their training, this is a pivotal point in their existence, as observed by the greater population. By donning their all-black uniforms, the public views them as a source of help, not harm (although they generally do not treat the orogenes any better).

Syenite describes how the local people and government of Allia treat her and Alabaster’s presence – one of necessity, not of gratitude or welcome. When Syenite and Alabaster get to Allia they meet with a government official that is, from the start, rude and dismissive of them. It takes them days to meet with the correct official (I’m being short here to save on time as we’ve all read the book at this point), someone attempts to poison them, and the general population treats them as if they were the equivalent to the Geneseo stray cats – something that shouldn’t be a problem but somehow is. I digress…

The point here is that the Fulcrum is supposed to serve as a place of change, where feral roggas go to become imperial orogenes. One thing to note is that the Fulcrum is where Alabaster decides to create the Rift that sets off the final season to end all seasons. This is where I’d like to address the title of the course itself: Blackness, love, and Justice. I think Alabaster’s intentional choice of the Fulcrum to create the Rift is part of his seeking of justice from the Fulcrum and society as a whole. He literally changes the environment, using his fulcrum and torus, by creating the Rift in order to seek and create change. I would also like to point out that the United States’ Lady Justice is depicted as a blindfolded woman wielding a sword and balance. I always imagined that the center of a balance would be the fulcrum of the balance. If and when the balance is shifted on the fulcrum, then change will occur.

Sharp change to the Crucible. According to Merriam-Webster’s dictionary, the word “crucible” has three definitions. They are as follows:

I believe that all three definitions are relevant in the sessing of meaning within the context of the novels. The first definition describes what I immediately think of when I hear or read the word “crucible.”  I think of videos of people melting down metals together to create greater, more complex, and stronger materials. At the Fulcrum, orogenetically gifted children are taken to the crucible to hone their skills. They are broken down under the pressure of their peers and the guardians in order to become stronger and more skilled. This is also tied to the second definition. After much practice in the crucible, honing and controlling their orogeny, the grits are tested for their ability to become official Imperial Orogenes and choose their new identity. The third definition comes into play along with the correlations with the first two definitions. The Crucible is a place where grits learn and develop themselves and their orogeny. Within the crucible, one of the skills that the grits develop is the control of their torus.

A torus is defined as a surface of revolution generated by revolving a circle in three-dimensional space about an axis coplanar with the circle. When a torus is described in the novels I always think of when Aang, from The Last Avatar, goes into his Avatar state (see picture attached if unfamiliar. There is a ball of energy, in Aang’s case, the elements, surrounding the character in question. Within the “ball,” the character or characters are safe from any harm, touch the “ball” and serious injury will occur. Within the crucible, within the fulcrum, Damaya/Syenite/Essun learns to control her torus in order to navigate her orogenic abilities. 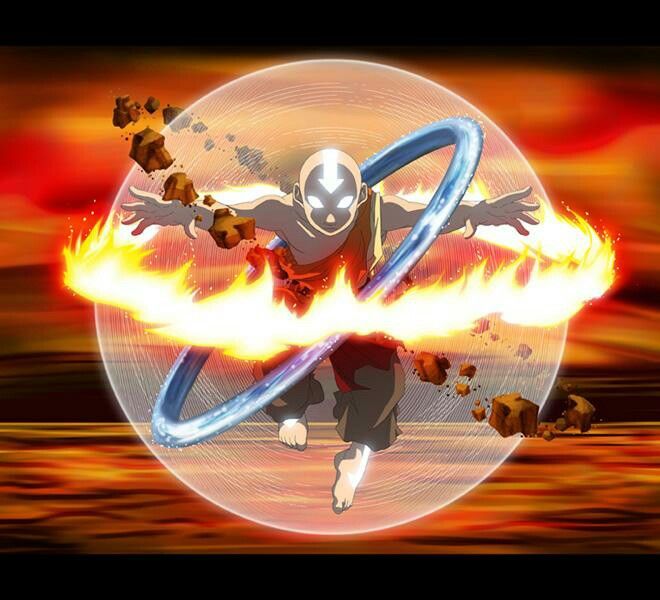