A history permanently erased is not enough to question who I am, for who I am is more than my history. However, my history does play a role as to why I am here. And then there is the question to why am I here?  A question that will probably remain unanswered by the end of this post and time itself. I had recently come into contact with two artists that had taught me to look at line and space in unimaginable ways. There is a literal sense of looking at space and line as they surround you. And then there is that of the imaginary lines and space in which we use to limit or extend ourselves.

My history connects to imaginary space and line as to explain that I’ve been taught as my parents before I have been taught to think in a particular manor. To never go outside the lines, and to go around such space. Growing up in America I have become spoiled yet hindered in the way that I think, and that is not to just blame the country. My hindrance is in part my own responsibility. But it does not become hard to blame another identity for your restraints. Especially when in part they hold some responsibility. The idea of America’s biggest mistake, slavery, being something to confront, gives us power like no other. We are able to acknowledge at least out loud that the damaging and genocide of innocent people were and is wrong. But we later think after confronting such issues what do we do? After the struggle what is there? I find it hard to celebrate when the consequences are so severe. Trauma is lasting generations affecting our mental health and what are we to do? How do we move on when moving on doesn’t always feel right?

As a first-year student I am struggling to find out who I am as a person and what my purpose is, all I have come up with so far is uncertainty. I have tried to look into history to see that all that has been done, the fighting, and protesting, and the endurance of lost and discrimination are sacrifices that I am reaping the benefits of. There is the guilt of not paying that sacrifice the justice that it deserves. But I can assume that not knowing, and having that freedom to exercise uncertainty is to in a way pay such sacrifice a thank you. And to be welcoming to the idea that history however ugly and blotchy it may be, the acts of fighting and continuous fighting were made for such benefits and should be celebrated. While looking at the work of Steve Prince, particularly Urban Mix-tape I was able to see the in-clarity in our history as African Americans. But I was also able to see clearly what came out of such a dark error, and era. And I think in time, although it will prove difficult I will be able to see the beauty in it somewhere. 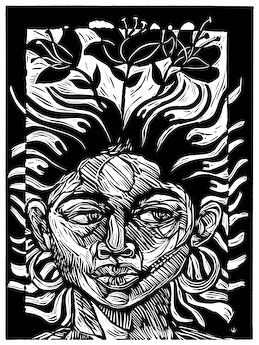