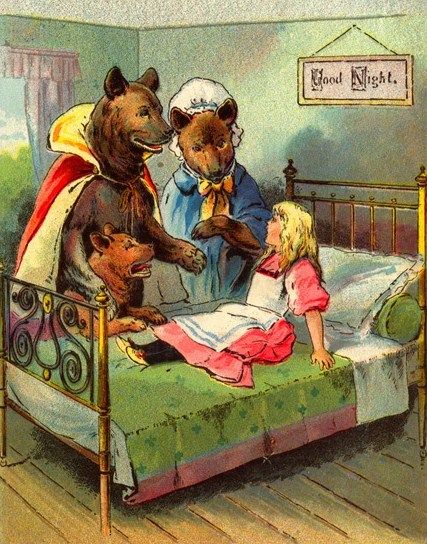 A few days ago, I was flipping through the anthology of poems we received after visiting the heating plant. As I did so, I was drawn to the poem entitled, “European Folktale Variant” by Toni Cade Bambara. This piece was my favorite of the collection for numerous reasons, but what I found most interesting was how it ties back to some of our discussions regarding ownership and black culture.

Bambara’s poem describes the “Goldilocks” folktale that many people are familiar with. The difference between the original folktale and Bambara’s piece, however, is the way Bambara frames the titular character. Instead of an innocent, naïve child, Goldilocks is depicted as a brash juvenile delinquent, “The way the story goes, a trespassing towheaded pre-teen barged into the rustic country cottage of a nuclear family of anthropomorphic bruins. Her motivation? Who can be sure?” Bambara rewrites “Goldilocks” as a police report, describing a crime scene of stolen breakfast cereal and vandalized bedrooms. In her iteration, Goldilocks is a thief and a vagrant, who is eventually apprehended and sent to a juvenile detention center.

Absurd as this poem is, there was something that I could not ignore about it. Goldilocks is constantly described by the color of her hair, a detail referenced at three separate points in the poem, Bambara goes as far to use obscure and antiquated language such as “towheaded” to find different ways of emphasizing Goldilocks’ whiteness. But what is Bambara trying to express through this?

As we have brought up in class, culture is one of the few areas of expression and power offered to African Americans, who have struggled with a long history of disenfranchisement. Even today, African Americans homeownership rates are twenty-nine percent lower than that of white people. As Bernice Johnson Reagon says, culture is the only “territory” that African Americans can control, a culture that is frequently embattled by outside forces. With this in mind, unequal exchanges of culture have been a persistent conflict for these communities and I believe Bambara is trying to make a statement on this.

While Bambara on a surface level is retelling a well-known story, the delinquent Goldilocks serves as a stand-in for white culture and its haphazard attitude towards black culture. Goldilocks is uninvited, entering a space that is not her own where she does not belong. She takes from the Ursidae family, destroys their house and shows a complete disregard towards their possessions. In doing so, she reflects Glenn Ligon’s idea of “Send me something from where you are, but don’t come here.” There is no exchange, only taking. This scenario can be easily applied to the subject of cultural appropriation and is an apt reflection of the frustrations of black artists. This poem has profoundly impacted how I view this subject and I plan to keep it in mind as we discuss similar topics in the future.