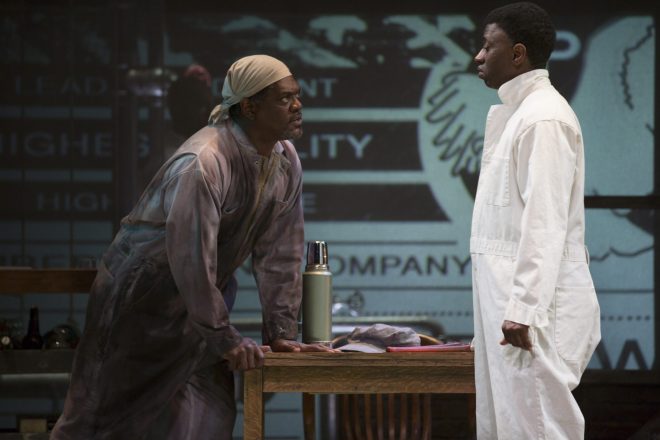 In my last blog post, I briefly touched on Glenn Ligon’s idea of “Send me something from where you are, but don’t come here.” In this statement, Ligon is describing the process of cultural appropriation and the troubling trend of black artists not receiving credit for the things they create. As I thought more about this idea, I began to wonder about how I could apply it to other works we have read throughout the semester. After re-reading a number of sources, I have the conclusion that Ligon’s statement is perfectly reflected in the chapter of Invisible Man that we read for class, particularly in Mr. Brockway.

First of all, it is important to understand Brockway’s position within the factory and what that means. Brockway makes it clear that he is a driving force in this factory and that is responsible for most of the paint production, “Them personnel fellows don’t want to face the facts, but Liberty Paints wouldn’t be worth a plugged nickel if they didn’t have me here to see that it got a good strong base. Old Man Sparland know it though.” Brockway goes on to explain that he has been around since the factory was first constructed and is intimately familiar with the layout. If Brockway is to be believed, he is a pivotal part of this factory and is absolutely essential to its functioning.

Despite Brockway’s importance within the factory, there are a number of details that seem to contradict that. First of all, Brockway is relegated to a deep, dark basement described as three levels underground and sealed with a heavy, metal door. His physical position is one of isolation, placed away from the rest of the factory. Brockway is also constantly under threat of losing his job and deeply, deeply fears the union; whose members are intent on kicking him out of the factory. Brockway hates this organization so much that he becomes incensed when the protagonist simply mentions them. It seems unusual that a man so important would also be so marginalized.

Now, I return to the controlling epigraph of this post, “Send me something from where you are, but don’t come here”. To me, Mr. Brockway is someone who the system has failed, because of his race, class, and other factors. There is no reason he should be relegated to the status that is and yet he is nonetheless, living in darkness and poverty. In many regards, Brockway embodies the many black artists who have created something, only to have it stripped away, taken from them, and put through a “factory” that sanitizes their creation for the general public. Brockway cares about what he does, it means something to him and yet the only response he receives is either callous disregard or active disdain. He is an outsider, a person who has never been accepted by the greater systems at play and likely never will.