And when I say “they,” I mean those who chose, and choose, because it’s both historically and futuristically, to take whatever resources Africa provided and provides without asking for permission. They manipulate, con and steal. And sometimes they commit murder in the highest degree. This was all that was taught to me about my history. There is a likeliness that such trauma from a constant motion of oppression will never  reside to distance itself from those who are directly linked and sub linked to it. They are and will forever be affected by such relentless and unnecessary persecution.

W.E.B Du bois knew of such affects and recognized how they impacted the African American community. Du bois was a civil rights activist, sociologist, historian, Pan- Africanist, writer and author, In his “ Souls of Black Folk” written in 1903 he describes, the Veil of Race, which metaphorically speaks to the divider that separates the oppressors and the oppressed. In my natural world the oppressed has always been African people, whose descendants, now call themselves African American. What has grown now to be the motivation within in this group of people is the constant proving to non people of color that they are able to meet their standards in the social atmosphere. It’s constantly having to prove your worth because right from the beginning, right from Africa your worth counted on how many hours a day you could work before you broke, or how much money you could be sold for, how strong and equip your body was, how entertaining and clown like you could be. African Americans had become a stamp of stereotypes in America and where marked and measured as dangerous and ill deserving. Colonizers and conquest have created a divide among African and African American people, to the point of no return. And even after that, out of systematic and generational oppression, leaders were born, to encourage the masses that African Americans belonged in the country in which they were forcefully brought and bought into.

Someone who does a great job at representing such growth is artist Steve Prince. A New Orleans, Louisiana born Catholic who has used his art to reinforce a remembrance within our culture now of many who have struggled within this country. In a piece called “ A Jazz Song with a Lot of Blue Notes” Steve is able to artistically symbolize almost like a timeline of the African American experience, where at the bottom you have figures, figures that are not detailed in features they are clumped together and tightly packed. This part of the composition can explain the disconnect between the African American community and the many who have come before them. Unfortunately  as it was the documentation of African ancestry was in fact never if so barely documented. As result of that, divergence is rooted, and the making of two different cultures had begun. However emerging out of such brutal hardships is that of leaders, families, faith, and change. Out of all the ugly there is something most beautiful at how accomplished a stolen and oppressed people could be. For instance Steve’s portrait of the 44th president of the United States, Barack Obama.

It encourages the idea that African American people are more than a stolen people, they can do more and be more, regardless of being and doing so as proof to another. 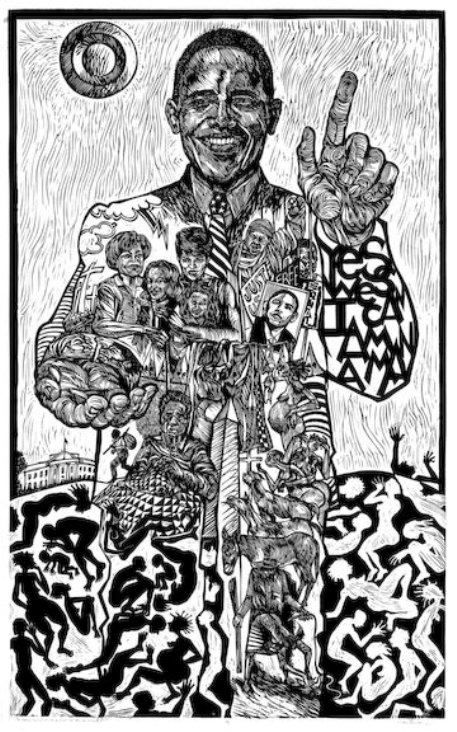