In Solnit and Snedeker’s Unfathomable City: A New Orleans Atlas, “Snakes and Ladders” is a New Orleans map which geographically locates and symbolically categorizes acts by civilians and law enforcement into ladders – “acts of rescue and solidarity” – and snakes – acts of “sabotage of survival” – in the aftermath of Hurricane Katrina (128-129). Discussing this map, Solnit points to the gross abuse of power by law enforcement, and their attempts to maintain control of a dismantled city through horrifying and unethical acts of harm ranging from police shootings of unarmed citizens to the abandonment of prisoners in a flooded prison. Solnit describes the concept behind the map: 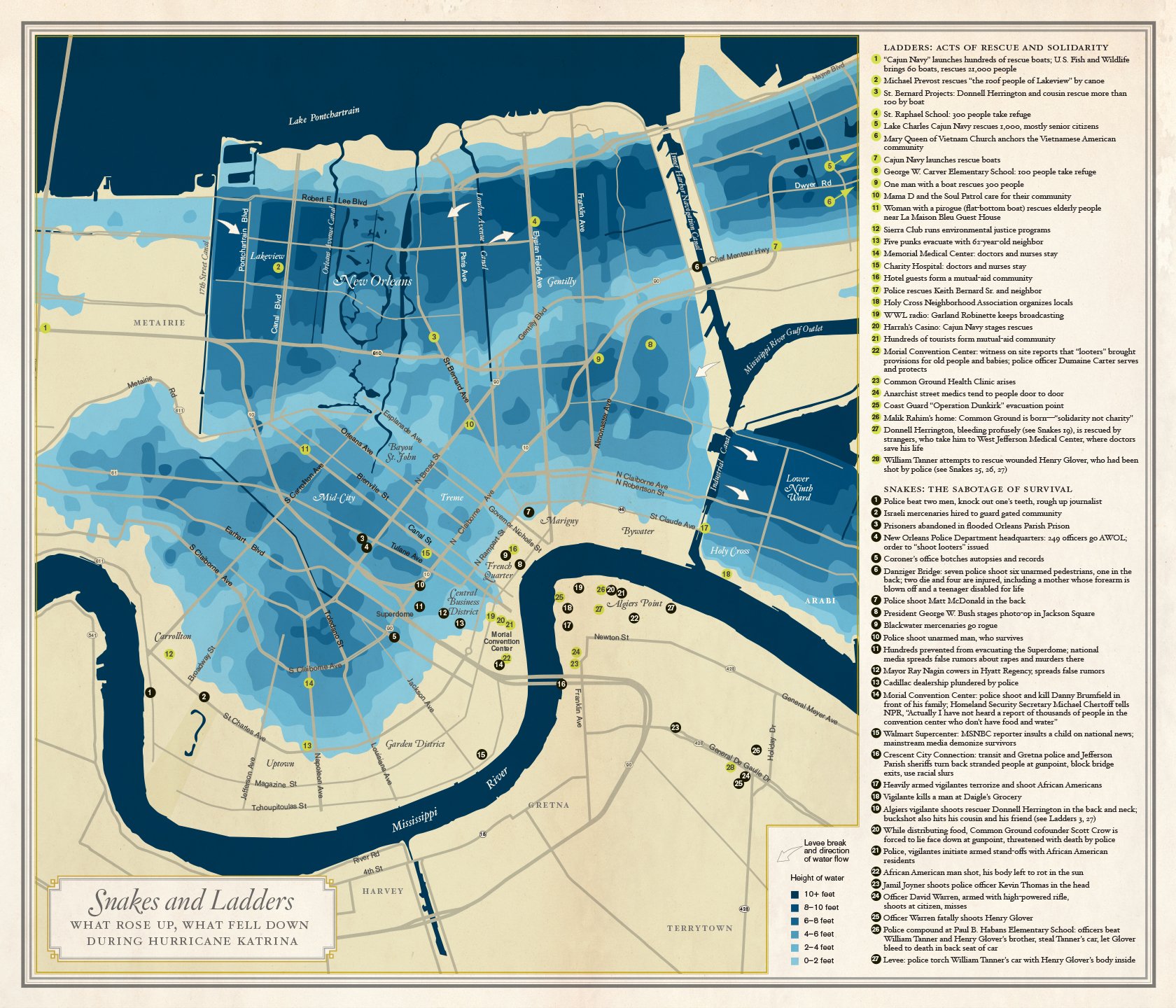 I thought of the landscape of New Orleans in terms of the ancient game of Snakes and Ladders. If you ran into a snake, you might have died of something that had nothing to do with the weather, or you might have gotten stuck in the nightmarish city. […] But if you ran into members of the Cajun Navy or other rescuers in boats, […] then you had a ladder out of the worst of the situation. There were far more ladders than snakes, but the snakes were powerful people. (131)

In class on January 26th, Beth walked us through a hypothetical situation where everyone at SUNY Geneseo tries to leave campus at the same time. Through considering traffic navigation, circumventing blockades, and the logistics of trespassing, we related the ability to leave freely with autonomy, while an inability to leave does not necessarily reflect a lack of autonomy but instead can be a result of allochthonous controls over people’s actions. Through this example we can see roads as exerting allochthonous control, directing the flow of traffic to dis/allow people to drive with autonomy.

According to Timothy Brezina, poor government preparation in anticipation of Hurricane Katrina left New Orleanians ill prepared for a similar reality in a mass exodus from the city; however, an element of success was found in a “contra-flow” plan, where all highways were unified and directed outwards from New Orleans. This allochthonous plan helped with congestion on roads, but did not eliminate it, and the plan only aided those who had access to cars. Thus, many New Orleanians trying to leave could not exert their autonomy because they had to use allochthonous means to attempt to escape the city.

Thinking of autonomy in mobility, we can see on the “Snakes and Ladders” map that the snakes mostly cluster along remaining non-flooded roads and relatively dry areas, while the ladders tend to be spread out in heavily flooded areas as well as present in shallower and non-flooded areas. I interpreted these patterns to be related to the autonomy of water-based travel versus the allochthonous nature of roads and (relatively) dry areas attempting to be maintained by law enforcement. The people committing “acts of rescue and solidarity” were likely not limited by the allochthonous streets, as they must have used boats, rafts, or unconventional means to navigate the flooded areas, and thus were allowed autonomy in traversing the area. The people committing acts of “sabotage of survival” clustering in drier areas and around streets is representative of their attempts to maintain order on legal roads and non-flooded areas where they can maneuver traditionally, and aligns with their immoral tendency to prefer gaining control or restoring ‘order’ over bringing actual aid through actions.

Solnit’s earlier description of survival made it seem like a coin flip whether one would find a snake or a ladder in searching for help; however, with this observed pattern of clustering, a strategy to overcome this randomness might have been to use one’s autonomy and venture through the flooded areas as opposed to searching for allochthonous help along roads and on dry land.

Before jumping to conclusions, we must recall that Solnit said there were “far more ladders than snakes,” and then acknowledge that the map is curated to show a small sample pool of acts (55 depicted) and has a disproportionate amount of ladders and snakes (near 1:1). This map could not practically show all the acts which would be classified as the snakes and ladders of Hurricane Katrina, so it would be impossible to draw any conclusions without all of the data. This is, however, an interesting way to consider the place of allochthonous control in relationships of autonomy and transportation, and may be worth revisiting later in the class.