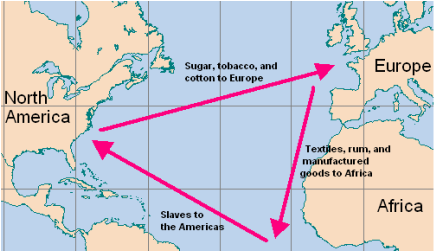 During her lecture, Dr. Adams showed us an image very similar to the one pictured above. It depicts what is commonly known as the Transatlantic Slave Trade. In class we discussed this image and I noticed several issues with the image that I, frankly, never really thought about for the majority of my academic career. For example, this image in particular shows a simple linear, one-sided system of trade with only three points of exchange (and it would have to struggle to be further from the reality). This blog post is by no means an expose on the public education system, but I will say that it did, for me, allow for a great degree of formal distance from the subjects my teachers were required to teach me about. That is, a few blog posts ago I wrote about apathy being too prevalent in society; well, I was definitely ignorantly apathetic. Additionally, none of my primary or secondary education teachers ever taught me so much about the American slave trade in thirteen years as Dr. Adams did in approximately one hour (nor did they make me care as much).

This image is something I remember seeing in my 11th grade AP US History class, and it certainly elaborates on the topic of triangular trade. This depiction may show with greater complexity the “items” being exchanged and or multiple trading posts, but it still lacks several fine details. One such detail is that people are not items, and certainly shouldn’t be available for purchase and exchange. Something both of the sources that the above images come from had in common were their mention of slaves being shipped to the Americas from Africa. As Dr. Adams and my classmates pointed out, the Africans that were enslaved were generally not slaves to begin with. It is not realistic that slave was an occupation where those with that role decided to ship themselves across the ocean to be forced into hard labor.

This image refers to the trade coming from Africa as “Enslaved Africans,” which is perhaps a step in the right direction (rather than referring to them as slaves). However, if you note that the other two categories of goods are “Raw Materials” and “Manufactured Goods,” you can perhaps begin to see the larger problem with grouping together the words “materials,” “goods,” and “Africans.” The enslavement of hundreds of thousands of people should not be so casually grouped with sugar, cotton, and tobacco being shipped to Europe for luxury consumption.

Dr. Adams presented on a subject that, prior to her lecture, I would have claimed competency in. However, just one specific example of something I did not know about was the inclusion of South America in the triangular trade, let alone how big of a part that continent played. A big piece of what Prince’s art seeks to do is educate through visual mediums. Dr. Adams did a similar thing in her lecture by presenting an image I thought myself familiar with, and then educating me in the multiple reasons in which I was mistaken. It was a terrifying realization to recognize how “un-woke” I am and a fascinating realization that the images from my history textbooks can (and should) be dissected in the same way we are looking at Prince’s work. Though, at this point in the semester, I’m not surprised at which images detail more truthful narratives.

Another thing Dr. Adams’ lecture made me think on was at which point should a person “in the know” (read: educated on unsavory truths) share their knowledge. That is, I believe it was Amina who brought up that she was more familiar with issues of blackness in America than a teacher and yet did not say anything to contradict that educator. I can image the feeling of confusion as to why the teacher was sharing false information, or maybe, at that age, wondering if it was you, in fact, who had the wrong information. One of the goals of public school education is to teach students to think critically about a variety of topic, but it is also drilled into students to not speak out of turn or cause a disruption during class time. If a student spoke up to contradict an educator, I cannot see that going over well for the student. If the teacher shut down the student or disciplined them in any way, that action would support the idea that one, the student was wrong and an unreliable source of information and two, that there are consequences for speaking when one hears incorrect information being spread. Honestly, after thinking on this for a bit, I am very concerned that the situation I just described has in part led to our society being so apathetic. As Dr. McCoy was detailing last week, the damage is doubled if education is harming in situations where it is meant to help and heal.